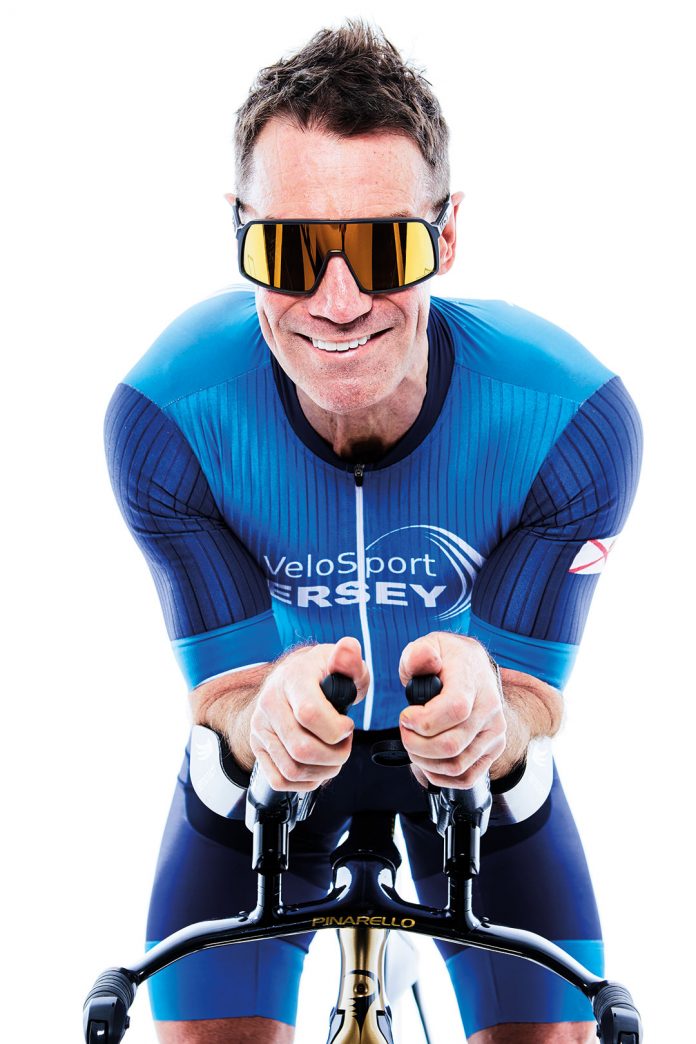 This month we met up with local  sporting legend Tony Quinn. Tony is a Managing Director of Equinox Trustees Limited and Senior Partner of it’s associated Chartered Accountancy practice Clive Tomes & Co, along side this he races competitively for Velo Sport Jersey which he helped set up for fellow cycling enthusiasts on the island.

WHAT GOT YOU INTO COMPETITIVE CYCLING?

After competing successfully for a number of years as a swimmer, including swimming for the powerful City of Coventry national GB squad I realised that I needed to find a new sport that I could compete in, as by 20, the younger swimmers were arriving at my level due to the young nature of the sport.  My best friend at the time Martyn Aubert had recently started racing along with his brother Toby and I went along to watch a few races and from there the seed was sown.

When was Velo Sport Jersey formed?

Prior to 1988 when Velo Sport Jersey was formed we were all members of the Caesarean Cycling Club which was the only cycling club in Jersey and although we were able to race in France and the United Kingdom the bulk of the competition was locally-based and at the time a group of us wanted to focus more on racing away, which we were able to do through sponsorship after we formed Velo. Since then the club has grown significantly and attracts riders of all levels with varying goals from keeping fit and healthy right up to international competition. Interestingly, I am still racing against Martyn some 37 years on which is something I wouldn’t have expected to be saying when I started racing in 1984.

What do you love about cycling?

Firstly and foremost it’s the competition as I’ve always competed in one sport or another since the age of 8 and cycling provided the perfect progression from swimming as one can race at any age, there are even riders competing in their 90s at a high level in a number of countries.

Cycling highlights so far in your life…

Most of my cycling wins have come from time trials. This is where a rider competes not only with the other cyclists but against the clock. It’s referred to as the race of truth within the cycling world as a rider can’t hide within a peloton or win from a sprint, it’s a long consistent effort with no protection from the elements. Looking back I think my favourite local win was the Inter Insular 25 mile time trial in the late 1980’s which I won by going under 58 minutes which at the time was a new Channel Island record in what’s seen as the blue ribbon event in time trials with riders still hoping to break the hour on Jersey’s tough sporting course.

With travel restrictions still in place due to COVID 19 I am concentrating on racing locally. In 2020 we were lucky enough to race from July onwards and although I was forced to cancel a number of international stage races I was due to go to in Europe the fact that we were able to compete at all was amazing. If restrictions ease and I am able to race away my target events are two three-day stage races, the first in the Italian Dolomites and the second on the legendary Mont Ventoux.

How can people get involved?

Velo Sport Jersey has a website and Facebook page for people to see what the club can offer them. We also have weekly club runs, on both Saturday and Sunday, that set off from the steam clock on the harbour, however recently these have been restricted due to COVID.

Visit www.vsj.je to find out more and get involved!

Love in the time of coronavirus