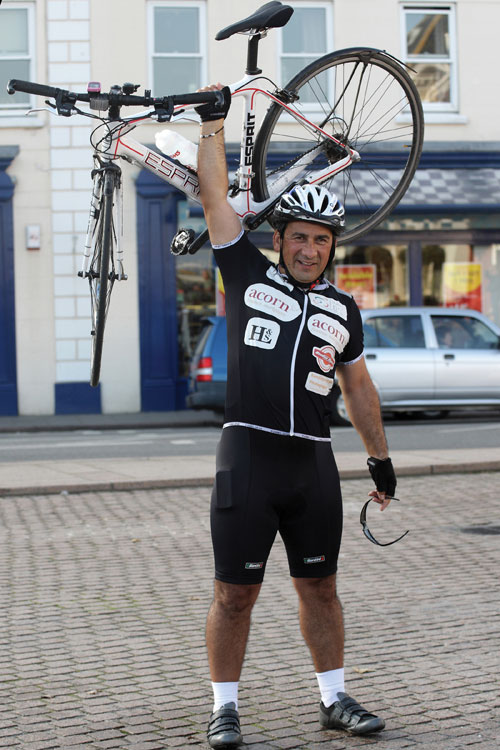 The 10th of October 2010 seems a long time ago for many of us, probably remembered best for being the 10th of the 10th of the 10th. But for compulsive fundraiser Murray Norton, the date is still pretty fresh in the mind and perhaps some of the other parts too, as this was the date he completed his sponsored challenge to cycle 10 times around Jersey. You may also not know that Big Maggy’s Cafe is so called after Magnus Backstedt. He is also a cancer survivor and Big Maggy’s donate 10% of every bag of coffee they use/sell to a kids cancer charity. Meet the guys>>

G : Did it hurt?
M : Bloody right it did! The second day was the worst, as I think I was knackered after going twice around on the first day, so lap three the next morning was awful. I got from St Aubin to Gorey with the wind against me all the way in one hour twenty, that's about forty minutes more than it should have been and the confidence went along with the legs. Fortunately, as I stopped for drinks, it wasn't talked about with the team. Being quiet for me and the team wasn't normal. By the time I'd got to laps nine and ten there was nothing left in the legs or mind.

G : You mentioned the team?
M : Yep, without whom…. da-di-da. You hear that every time someone achieves something and it is so important and true. Anna, my better half, did the drinks, snacks, spare
clothes, towelling down and cheering me on every mile of the ten laps. She deserves a medal for putting up with me. Paul Stone coached me prior to the ride and on many of
the laps too and it was probably more difficult for him to ride slower at my pace than to cycle at his pace. But him and Marc Le Sueur, who built me the most amazing carbon-fibre Esprit bike were the best company with the worst jokes and topics of conversation. Others were running things and joining in too. Kieron (Nice) Streker rode some, Kenan Osbourne supported,
Kandidprints filmed and snapped loads and many from Headway Jersey came out to follow me along the west coast with banners and cake. Then there is every one who has given money so far – all utterly brilliant.

G : Cake! Interesting nutrition then?
M : Porridge at 5.30am with a litre of high energy drink and an energy bar is not my idea of heaven. We liven things up with a stop at the Bee’s Knees cafe in the car park at Les Platons with our personal favourite 'food of champions' blood & egg baps. Black pudding and fried egg roll to you, washed down with tea twice a day – they were great to us there! I recommend it.
Pasta at Murray's after every first circuit and plenty again at the end of the second lap. I burnt plenty of calories, ate plenty and lost twelve pounds during the ride.

G : How was the finish?
M : Great. Just a wonderful feeling, but I knew the end of the ride was just the start of the fund raising

G : You did it for what exactly?
M : Ten excellent local charities. I'm aiming to raise £100,000 to be divided between the Variety Club of Jersey, Headway Jersey, Family Nursing & Home Care, Jersey Shelter Trust. MenCap Jersey. Autism Jersey. Click-Sargent Jersey, Jersey Asthma. In Aid of Anthony Lewis Fund. The Special Care Baby Unit. The ride is only the first fund raiser. So far there is over £12k in from the ride alone, but people can still give – please keep giving!

G : What's next then?
M : On Dec 1st from 6pm. Total inspiration, Anthony Lewis is switching on the lights in St Aubin, with Santa and stalls outside the parish hall and some seasonal singing, we hope to raise some more funds. Then in late January I want everyone's spare euro coins that they never use, but keep in a drawer somewhere! There is going to be a massive island collection for them from Murray's 10 Charity Challenge, so sort them out.
Lots of other things too during next year, finishing off with a black tie ball at the Hotel de France on the 25th June 2011.
It would be unrealistic to expect someone rich to come along and put several tens of thousands on the table (although don't let me stop anyone!), so it's a year of lots of little amounts, from many people put together.

see www.murrays10cc.com
for more details of how to donate.

Name: Magnus Backstedt
Age: 35
School attended: St Lars Linkoping in Sweden where I ended by doing my A-Levels
Favourite ice cream flavour: Strawberry Sorbet
Favourite Animal: Polar Bear – they look so cuddly but….. they can be volatile!
Favourite food: Lasagne
Favourite cycling expression: There is an Italian expression I do like. “fila indiana” means (indian queue) when the riders are single file on the last mm of the road and everyone is fighting to hold the wheel in front of them in the final kilometres approaching the finish – ‘La Fina’.

When did you start cycling?I started in 1987 as a 12 year old because a friend of mine I was doing downhill skiing with was riding. It took 2 weeks until I won my first race and I have been stuck with it ever since.

What is your worst cycling accident? Where do I start??? Tour of Qatar in 2008 is a good one (check out http://www.youtube.com/watch?v=77FuwxthKrQ) there are a number of other ones, but this is a good one. It effectively ended my career and it was very painful – it was a bad collar bone break.

Where do you think is the best place to cycle in the world? French Alps and I do like the area around Stellenbosch in South Africa

Where and when was your favourite cycling moment? Winning the 2004 Paris-Roubaix, it was a childhood dream and I still can’t believe it was real. For me it was like a 12 year old dreaming of playing in the World Cup Final but actually going on to do it and then scoring the winning goal.  My stage win in the Tour de France was special and I will always cherish it but Paris-Roubaix was the one for me.

How can people get into cycling in Jersey?  It’s a great time to start cycling in Jersey, I’ve been lucky enough to work with the new Moore sponsored Youth Academy this year and since the Tour de Bretagne, the Academy has gone from strength to strength, already producing a National Champion in young George Milner. Just show up at one of the road or MTB sessions organised by the Jersey Cycling Association’s Youth Academy – details at www.jcaya.org

What competition have you done most recently – and how did you do? Well I last raced around the UK raising money for UK Youth on the Nigel Mansell Challenge. We raised over £100,000 in 13 days. I love competing still though and you never know, there may be a few more races left in me! It never leaves your system as a professional athlete. 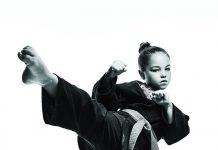